Grandpa in My Pocket

118 x 12 minutes including a Christmas Special

Grandpa in my Pocket first hit the UK screens in February 2009 and was an instant hit with fans. The series has been nominated four times for a children’s BAFTA and won the 2010 BAFTA Cymru for Best Children’s Programme.  The stories take a fun, lighthearted look at the hugely important relationship between Grandparent and Grandchild and now there are 118 entertaining episodes to enjoy, including a Christmas Special.

The New Adventures of Grandpa in my Pocket (52 eps) takes the story forward in time.   Our original grandson, Jason Mason is now a teenager and the family have moved to the fabulous Mill on the Marsh on the outskirts of Sunnysands.  They run the windmill as a small hotel and all sorts of extraordinary guests come to stay.   The new series features two other grandchildren, Josh and Elsie, who come to stay for the summer.  Grandpa reveals the secret of his magic Shrinking Cap and soon they are joining him in all sorts of hilarious and magical adventures. When Grandpa isn’t in his armchair, everyone thinks he’s gone for “a little lie down!” But in fact he has a magic Shrinking Cap which only his grandchildren, Jason, Josh and Elsie know about. When Grandpa puts his cap on, he becomes small enough to fit into a pocket, not to mention Jason’s toy plane and car or Josh’s helicopter. He can even fly on Elsie’s Mrs Ostrich! He turns up in all sorts of unlikely places and creates comic mayhem which his grandchildren have to sort out. Grandpa is playful and mischievous but always a force for good. Together, Grandpa and his grandchildren make a great team and have a host of hilarious adventures.

AN ALL STAR CAST 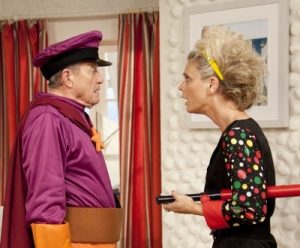 GRANDPA GOES AROUND THE WORLD

Grandpa in my Pocket is distributed worldwide by DHX Media, based in Toronto Canada and so far has sold to over a hundred international territories. The show is a huge hit in Australia (ABC Kids) where it regularly tops the children’s ratings charts. Other countries enjoying the series include France, Italy, Republic of Ireland, Canada, Norway, Israel, South Africa, India, Russia and the Far East.