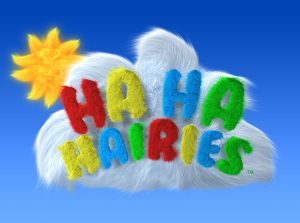 Ha Ha Hairies is a live action comedy series (52 episodes) for Cartoon Network’s Cartoonito channel and S4C in Wales. The specially-produced Welsh language version takes the title Bla Bla Blewog. Inspired by the silent comedy geniuses of past and present, Ha Ha Hairies has been created and written by Mellie Buse and Jan Page.

The series was first rolled out during 2012 and watched in an estimated 125 million homes across Europe, the Middle East and Africa.  Ha Ha Hairies was nominated in the Pre School Live Action Category of the 2012 Children’s Baftas and again in 2013 and it won the Bafta Cymru for best visual effects.

Ha Ha Hairies is set in the fantasy world of Hairyland, where everything is hairy. The Ha Ha Hairies are a fun-loving happy-go-lucky family whose lives are full of joy and laughter. There’s Ma Ha Ha, Pa Ha Ha, their elastic gymnastic daughter Mini Ha Ha, and the family dog, Chihua Ha Ha and they all live in a visually gorgeous hairy house with a fabulous hairy garden. Nanna Ha Ha lives nearby in her extraordinary Arty Den, near the Hairy Apple Orchard, where she creates bizarre art projects. There is the mysterious Forest of Frizz, the Curly Swirly Meadow and Ringlet River. And in the distance lies Hairytown where the Ha Ha Hairies sometimes go in their funny vehicle, the Flufferpufferpoop.


But not everybody in Hairyland is happy and hairy. High on the hill sits a purple gothic mansion called Chateau Shampoo and here lives Hairyland’s resident baddie – Boris Boo Hoo, who owns the Boo Hoo Shampoo factory. As you can imagine, shampoo is a must-have in Hairyland, but is Boris a successful business man? No, he is not. He is lazy, jealous, greedy, proud, avaricious and downright mean. Boris Boo Hoo is a schemer, always secretly plotting against the Ha Ha Hairies. It’s a wonder his son Boyzie Boo Hoo is so sweet and innocent, best friends with Mini Ha Ha. In every episode, Boris has “A Plan” and every plan not only goes disastrously wrong, it usually ends up making things better for everybody else.


As the live action slapstick comedy plays out, two CG animated Hairy Fairies – Wiggy and Kwiff – watch the proceedings and narrate the story, providing the only spoken dialogue. Together Wiggy and Kwiff form the Hairy Fairy Band, singing and playing a host of music numbers. With great characters, stunning environments, original songs and underscore, some fabulous dance numbers and a lot of falling over, this pre-school property has all the potential to become a big favourite with young audiences all over the world.


Ha Ha Hairies is about seeing the funny side of things, and having a positive attitude to life. It shows us that being lazy, jealous, mean or greedy doesn’t get you anywhere and it certainly will never make you happy.

The live action is shot at Enfys Studios, Cardiff with animation and visual effects produced by Red Wire Media.

Ha Ha Hairies has been produced with investment from Finance Wales and support from the Welsh Assembly Government.

The Educational Rationale Behind the Bonkers world of Ha Ha Hairies

Ha Ha Hairies is a mixed media series for young viewers, set in Hairyland. It features a happy hairy family, a comedy baddy – Boris Boo Hoo- and two animated Hairy Fairies who narrate the stories. The show has a strong and very straightforward moral message for our young audience. It says that if you’re cheerful, generous, happy and positive then you’ll have fun and be happy. If, however, like Boris Boo Hoo, you’re greedy, avaricious, jealous, lazy, proud and angry, you’ll always remain an outsider and miss out on all the fun. Our comedy baddy isn’t redeemed in this show. It’s not a question of saying “sorry” at the end of every story. Because that simply sends the message to kids that as long as they say sorry they can behave as they wish. No this is about learning that there are consequences! But in an entertaining way all wrapped up in ‘hilharious’ comedy capers.

The stories are delivered in a way that’s specifically geared to the cognitive stage of our audience. A mixture of mime, movement, dance and gesture characterises the whole world of the Ha Ha Hairies and gives it a unique theatrical style seldom seen on the small screen. This kind of performance has its roots in one of the oldest forms of theatre – Commedia dell’Arte – “the comedy of the craft of improvisation” which began life in Italy and developed into Pantomime – something that all kids love. This kind of theatricality totally connects with our core early years audience. They like big faces, exaggerated emotions, broad comedy. When an adult communicates naturally with a child, we heighton our facial expressions; we use more gesture. It’s instinctive and it helps children learn to communicate.

The Hairies also have their own improvised language. It’s well known that playing with sound and language – making up silly words – experimenting with gobbledegook, is not only hugely entertaining to little kids but also helps with communication and subsequent language learning skills. Our Hairy Fairies interpret the nonsense language using good English (or versioned language) so we always deliver ‘real’ language to our audience. Little kids relate to sound and gesture combined – signing language uses this and is now often used widely with tiny children so that they can communicate before their real words come along. This YOUTUBE clip of two babies communication sums it up.

But Ha Ha Hairies isn't just about communication or learning the difference between right and wrong. It's also about having a lot of laughs. And learning to laugh is the most educative thing in the world!